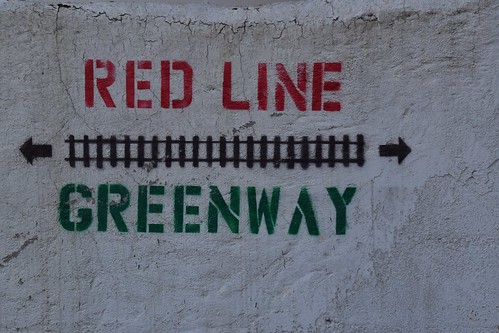 Back in 1977, Lennie Stover and Matt Koriath of the Rotary Club of Cleveland spearheaded a project to clean and beautify a small parcel of land adjoining the West 25th Street Rapid station in Ohio City. Over the years, the project grew and involved teams of volunteers for local businesses and organizations.

They had a vision to create what became Red Line Greenway, an ambitious project to create a three-mile recreational greenspace corridor along the near west side rapid line that would link downtown to the Zone recreation center at West 65th and Lorain.

In the last decade, the project began to attract the support of many partners, including Cleveland Metroparks, the nonprofit LAND Studio and the Cleveland Foundation. Major construction started in late 2019. The piles of tires and weeds have long since disappeared, although hints of a funkier past peak through in industrial landscape views, and graffiti on bridge abutments next to murals that appear to have been created by professional graphic designers. And on Wednesday 12, the RedLine Greenway officially debuted with a ribbon cutting, and, as long envisioned, cyclists, joggers, skaters, dog walkers and scooter riders are now filling the path.