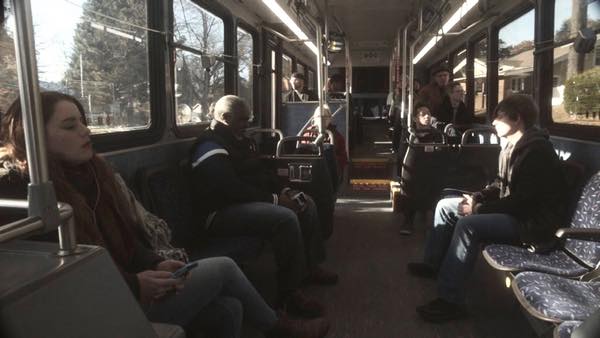 Over the past four years, Akron Soul Train has sponsored a growing residency program that provides multidisciplinary artists with a stipend to create new work, as well as engage the community with a special program component.

The next such public event involves Jonathan Chiarle showing the world premiere of his short film “Disconnected.” The screening is scheduled Thursday 1/30 @ 7pm in Akron’s Myers School of Art auditorium.

Akron Soul Train operations manager Christine Ries said this is the first time the nonprofit worked with an aspiring filmmaker.

“We wanted to establish ourselves as a safe place that everyone was welcome, so in 2019 we came up with a LGBTQ artist in residency,” says Reis. “Jonathan is the recipient of that award.

“He was chosen out of many applications, who were all different. We didn’t know exactly what the film was. It kind of took a form of its own once he got started, but we did have an idea that it had something to do with being considered an ‘other’ and feeling alone even when you’re among a crowd.”

Chiarle uses film to elicit empathy and bring awareness to the stories and characters often not seen nor heard. “Disconnected” is a meditation on loneliness and of not feeling connected in the modern world, reflected through strangers on a bus.

As part of his residency, Chiarle conducted workshops sharing with others the art of filmmaking.

“We started out with just a single resident the first year, there were last 12 residents in 2019 and this year we have 16,” Ries said. “We keep supporting and sponsoring more artists, and also we’re branching out. We have every discipline.”

Another component of Akron Soul Train has to do with encouraging collaboration. Not only is Chiarle’s film being shown at the University of Akron venue, but when the director made an unexpected request, the outfit jumped into action to grant his wish.

“Something that’s really cool about the Akron arts scene is that everybody works together,” Ries said. “When he said he needed a bus, well, that’s a big thing and it was cool it all fell together because everybody partners in Akron.

“Not only did Metro RTA donate the use of their bus, but they added a bus driver for like eight hours so Jonathan could film that scene.”

Looking ahead, Ries is optimistic Akron Soul Train’s mission and impact will continue to empower and inspire members of the Rubber City art community for decades to come.

“When I look at Akron Soul Train, I see it as we’re connecting the community and building a train of people,” Ries said. “It just keeps getting bigger. There’s nobody that’s funding artists directly like we are. We’re getting larger and larger, and helping more of the regional artists.”