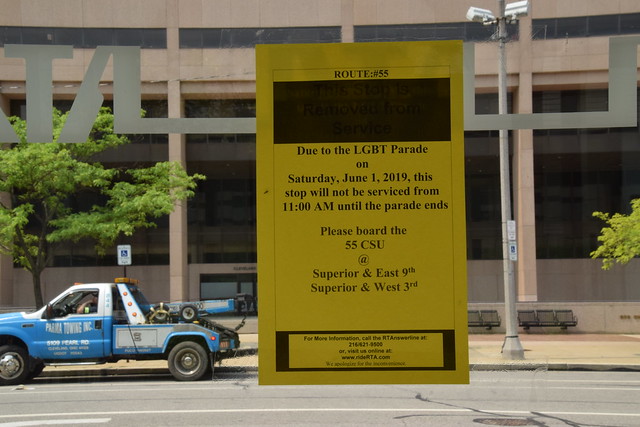 They said it was going to rain all weekend, but apparently no anti-gay pastor was able to conjure up foul weather to rain on Cleveland’s Pride in the CLE event, taking place on the first day of Pride month. The weather was perfect.

Mobs of marchers, not only from LGBTQ groups, but also local businesses, churches and sympathetic organizations such as Planned Parenthood, NARAL Pro-Choice Ohio and Moms Demand Action for Gun Sense, poured down Ontario into Public Square for the afternoon event, which featured food, drink, vendors, information booths, and entertainment on several stages.

The North Coast Men’s Chorus kicked things off with a passionate version of The Star Spangled Banner on the main stage. They were followed onstage by Windsong Feminist Chorus, who capped their set by singing happy birthday to state senator Nickie Antonio, the legislature’s first openly gay member. The Transgender Chorus followed, making their Pride in the CLE debut. Drag queens entertained the crowd for the rest of the afternoon as the crowd eagerly lapped up their dazzling performances.