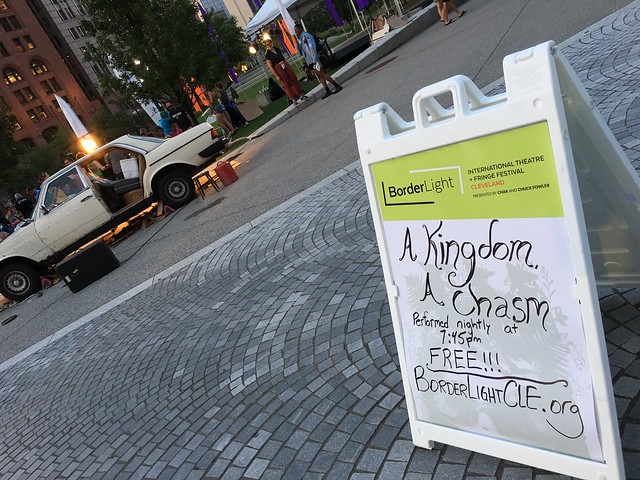 The first annual BorderLight International Theatre and Fringe Festival presented by Char and Chuck Fowler, snuck up on many people. In a good way.

We attended one of the first events of this year’s fest: A Kingdom, A Chasm, written by the New Orleans-based VI Ensemble with collaboration from Zina Camblin, with “Devisors/Performers” Khiry Armstead, Owen Ever, Lisa Shattuck, Adam Tourek, performed on the NW quadrant of Cleveland’s Public Square in broad daylight on Thursday 7/25 starting at 7:45pm .

For those of us politely seated in plastic folding chairs, the piece began as inscrutably and incomprehensibly as some of the characters you might see any day on any public square in America. It soon became clear that this story was taking place in post-Katrina New Orleans, or a post-civilized USA, or possibly Cleveland. Three unhinged, unrelated and unconventional characters are barely surviving in an actual beat-down Mercedes (no doubt trucked here from New Orleans), trying to make sense of their circumstances.

The brilliance of siting this performance outdoors on Cleveland’s Public Square soon became evident. Passersby ignored, did a double-take (what are fifty people doing sitting in plastic chairs in front of a mashed-up Mercedes?), and eventually became engaged themselves. Within a few fleeting moments, one of the key goals of BorderLight had been achieved.

BorderLight International runs through Sat 7/27 with more than 40 productions across 11 indoor and outdoor venues, from this very site on Public Square over to Cleveland’s traditional theatre hub, Playhouse Square. Indoor theatrical productions run side by side with a Fringe Festival inhabiting cool hidden spaces such as the Hermit Club and Cibreo Privato. Enjoy and Bravo!
Photos and videos by Thomas Mulready