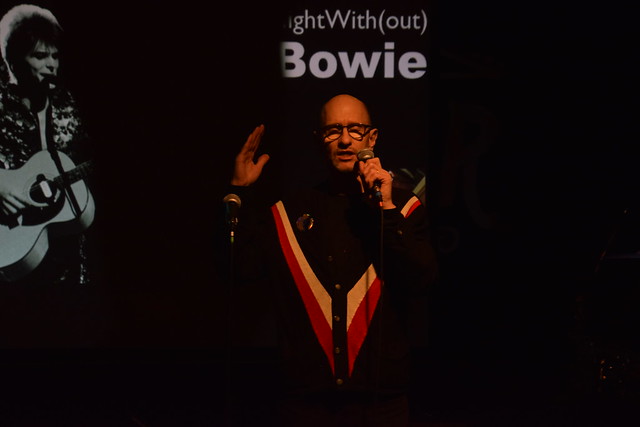 Celebrating David Bowie’s birthday as well as the anniversary of his death, Thomas Mulready and Cleveland glam rockers Vanity Crash put together seven evenings devoted to Bowie’s career and music. Each started with a multi-media program, narrated by Mulready and Jordan Davis, dedicated to a different aspect of his career. Each was followed by a high-energy set by Vanity Crash — frontman Dennis van Crash, guitarist Matthew Angel, vocalist Ginni Fontana and drummer Thomas Anonymous — that mixed Bowie tunes, both familiar and obscure, with related material and Vanity Crash originals.

The capacity shows took place all over northeast Ohio, opening at the Winchester in Lakewood Fri 1/3, followed by a Bowie brunch at Jilly’s in Akron Sun 1/5, a Bowie birthday show at Brother’s Lounge on Wed 1/8, three shows at the BOP STOP — an evening with Bowie on Fri 1/10, a benefit for the The Music Settlement on Sat 1/11 and another Bowie brunch on Sun 1/12 — and concluding with a Bowie evening at CLE Urban Winery in Cleveland Heights on Fri 1/17.

Re-live the shows in photos, or see what you missed and resolve to get tickets next year!