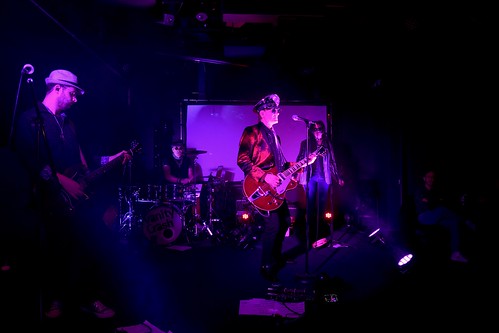 Cleveland glam band Vanity Crash crashed it up in a couple of Cleveland venues in two days when it presented its David Bowie show “Cracked Actor” at the CLE Urban Winery in Cleveland Heights in Friday and Ohio City’s BOP STOP on Saturday.

Both nights the band played tunes by Bowie and songs that influenced him, as well as about 50% band originals, including new material from their upcoming album. Interspersed were interviews featuring Bowie with his thoughts on mental health, as well as with local experts in the field of mental health. Also included were exclusive interviews with members of The Spiders From Mars, drummer Woody Woodmansey and pianist Mike Garson, who contributed piano to a Vanity Crash original they played. And clips of Bowie performances enhanced the band’s music.

On Friday night, it was a special treat have have legendary WMMS program director/DJ Billy Bass in the audience. It was Bass’s relentless early promotion of Bowie that made Cleveland the first stop on his tour in 1972 and gave him the springboard to break out nationwide. Cleveland was first, thanks to Bass!

On Saturday, a packed, sellout house rocked all night long, culminating in a packed dance floor at the end of the night. The audience really got wild and crazy!