Since tRump has been able to bamboozle so many people with his “Opportunity Zone” program that supposedly was designed to help financially marginalized communities climb out of their economic doldrums (but actually is nothing more than a sophisticated loophole for the wealthy to park their money without paying taxes), he now has rolled out a new scheme entitled “Opportunity Now.”

The day after taking a victory lap over his acquittal in the Senate by weak-in-the-knees Republicans who no longer know the meaning of the word “SHAME,” he took off for a pep rally touted as a “summit” in Charlotte. It featured “workshops on economic development in low-income areas, inmate re-entry into society, the future of historically black colleges and universities, and infrastructure.” In other words, it was a dog-and-pony show tailored specifically to win over black voters by making promises he has no intention of keeping.

However, most blacks in attendance knew to bring along a pair of hip boots because the bullshit was going to be knee-deep. The tipoff was the fact he brought along “Uncle” Ben Carson (the black guy tRump keeps close at hand so that he can rub that old black head for luck every now and then). Whenever that race traitor sellout opens his yap you know black people are about to get royally screwed.

“Nearly 35 million people across the nation live in areas marked as an Opportunity Zone,” Carson said in a tweet before the event. “Today, this administration is reinforcing its commitment to revitalize neighborhoods by bringing economic freedom to the forgotten men and women of this country.” All of which begs the question … since the tRump administration knew about all of these problems from the first day he took office, why has it taken him three-plus years to finally address them?

Could the upcoming election — and the fact that since whites are so evenly divided in their opinions of the demagogue, the black vote will determine the outcome of the election — have anything to do with his blatant pandering to people of color in North Carolina?

A small crowd of flag-waving tRump supporters and an equal number of tRump protesters gathered at the entrance to Central Piedmont Community College (CPCC) ahead of the president’s arrival to express their opinions.

When interviewed, one CPCC student, Savanna Shrader, 22, said tRump’s visit hits especially close to home for her since she’s originally from Charlotte. “I want him to know he’s not welcome here — he never will be,” she said.

The Democratic mayor of Charlotte Vi Lyles did not attend the event and took a personal day off on Friday instead. A city spokesman said Democratic City Council members told a local newspaper that they too would not be in attendance. “I just don’t have any faith or confidence in this administration,” said council member Malcolm Graham. “And I don’t want to be a part of a stage production.”

These elected officials who have credibility with the citizens of Charlotte should immediately organize a counter-event where they explain that if any of the pie-in-the-sky tRump is promising comes true they should of course immediately take advantage of any program that helps them or their families … and then still vote to boot his sorry ass out of office this fall. 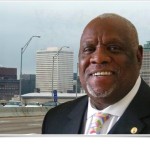